VESPUCCI - LITANY FOR A DEAD EARTH 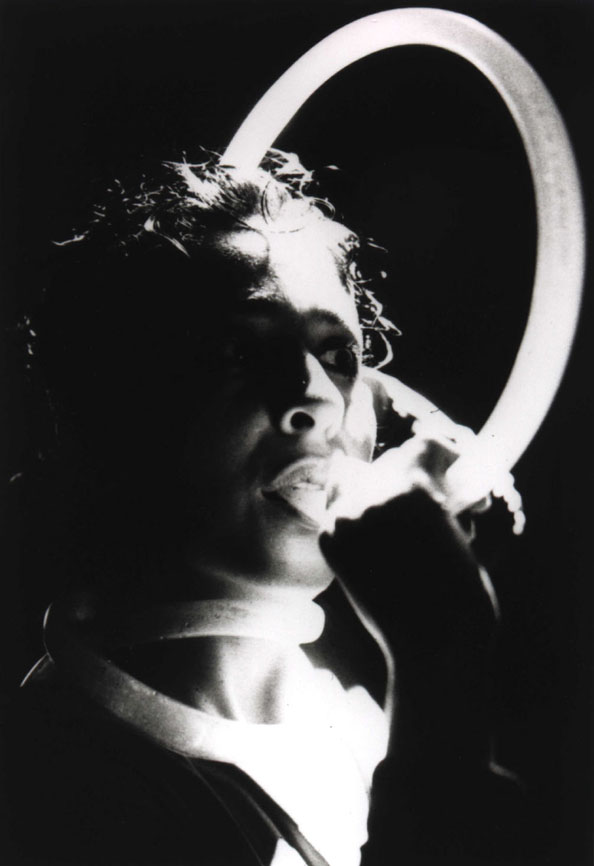 "VESPUCCI" is a test experiment on the way to the composition of AlienNation Co's new MIRAK sci-fi opera. The installation sets up a spectrum of several image orbits, one from the Vespucci space flight, another represents organic materials from planet earth, including an extraordinary ice sculpture and a metallic sphere, and the third devises the capsule movement possibilities for a birds and a microscopic cosmopuppet, suspended above the roof of the building and viewable through a telescope impmlanted on top of the Winter Street Roof. The orbit of the space birds is mirrored in the down corridor by the real floating fish in Singleton's plexiglass water capsules. The performances by Angeles Romero within the installation deal with two dimensions, physics and poetry, gravity and dance. Isabelle Ganz is heard as guest mezzo soprano, a voice from the distance.

The installation is performed in 4 different physical spaces through which the audience moves. The movement is like a dance. The audience encounters movement scenarios in film, sculpture, remote digital movies, sonic landscapes. The fictional content of the scenarios requires time shifts (from past to future, future to present).

The interactive scenarios (sculpture corridor, telescope) are works-in-progress. The VESPUCCI project is the prototype for a new dance opera MIRAK which is under development. "Litany for a Dead Earth" is the first stage of the libretto which was written by painter Donald Calledare and recited by Johannes Birringer.

The voice of Generico Vespucci in space: although drifting along orbital trajectory, the cosmonaut's 12-hour monologue seems to follow a linear, if distracted path of rational thought specualation, perhaps a form of hallucinatory logic of science, rationality in orbit compsoing a landscape of poetic ruminations on space, the end of time, metaphysics, color, modermity, aesthetics, and the transcendental. Vespucci's voice (we cannot see his body, only outer-spatial dimensions beyond the spacecraft through the point of view of the Voice) travels towards its final disintegration of understanding. Perhaps it is also the voice of the lost fatherm viewing the world, planet earth, the century, from a large distance or ironic distanciation, disengaged, disembodied - a virtual avatar of consciousness.