in preproduction for staging and international tour

"The only thing necessary for the triumph of evil,
is for good people to do nothing" E. Burke

Puntos de fuga (Vanishing Points) is a 90-minute interactive multimedia play set in an interrogation room where Amalia, a young maquila worker from Catemaco, Veracruz is being held for questioning in connection with the kidnapping of DEA Agent John Arenas. As the officer sets off to find incriminating evidence that links her to the drug cartel, Amalia reveals her supernatural powers as a means to keep a solemn vow of securing an American airplane in order to unearth the missing women in Juárez. The interrogation is existentially challenging to the interpreter, who is discomforted by its senseless brutality.

Admission to the staged reading is free. 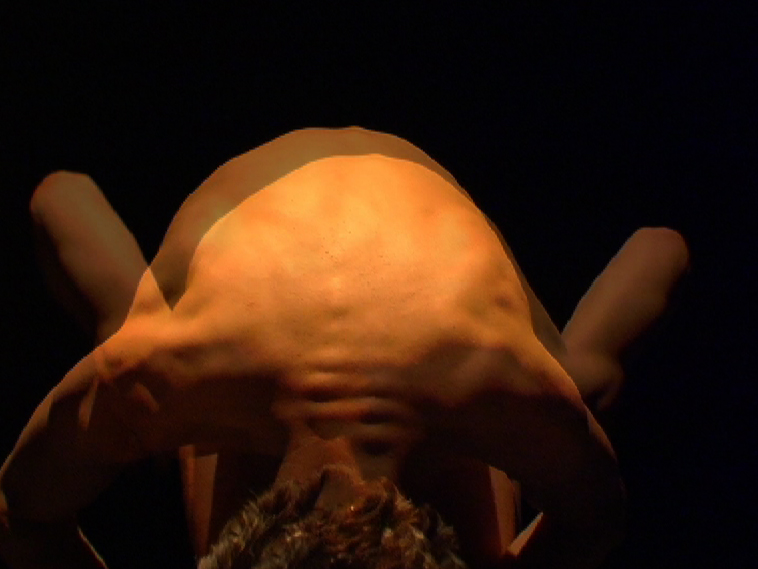 The music-theatre production Corpo, Carne e Espírito (Body, Flesh and Spirit), created by Paulo C. Chagas (music) and Johannes Birringer (digital choreography), premiered at the 9th International Theatre Festival of Belo Horizonte (Brasil) on June 27-29, 2008, featuring an ensemble of musicians and vocalists, and a triptych of film projections and animations inspired by the figural paintings of Francis Bacon. The work investigates the invisible forces of the human body in the contexts of new music composition (electronic and acoustic), interactive technology, and immersive environments.

The music for this audiovisual work was composed by Paulo C. Chagas, inspired by the paintings of bodily deformations and anamorphoses in Francis Bacon's oeuvre. It features three voices (soprano, counter-tenor, baritone), string quartet, percussion and electronic sounds that are integrated in the visual and performance environment designed by Johannes Birringer. The oratorio was conducted by Mr Chagas; live programming of the image movements, projected onto a curved triptych of screens upstage behind the musicians, was performed by Mr. Birringer.

The compositional plan for this performance of Corpo, Carne e Espírito was developed at the International Interaktionslabor (Göttelborn, Germany), the annual media lab directed by Birringer since 2003. During their residency at FIT Theatre Festival, Mr Birringer and Mr Chagas conducted workshops in composition and digital performance. The oratorio will tour European venues in 2009-10.